A big year for a small effect

Flexoelectricity is a property of all insulating materials whereby they generate a voltage when they are bent. Flexoelectricity is however a tiny, almost inmeasurable, effect at the macroscale, hence it remains relatively unknown. This year, however, there have been a couple of notable advances may change the status of flexoelectricity. The first has been the demonstration that, at the nanoscale, electromechanical actuators can be made that bend in response to voltage1. The key to their big performance is that things are much easier to bend when they are nanoscopically thin. In addition to being competitive in terms of performance, flexoelectric actuators also have other advantages over competing piezoelectric technology: their architecture is simpler, their performance is more linear and less temperature-dependent, and the range of available flexoelectric materials is enormous. Last, but not least, our flexoelectric actuators are made on silicon substrates, meaning that they are compatible with the key material and fabrication processes already used by microelectronics industry, which should facilitate their industrial uptake.

In parallel with the effort to make devices that exploit the large magnitude of flexoelectricity at the nanoscale, there is also a very active search for ways to make it meaningful also at the macroscale. Here we have made a major breakthrough discovery: by bending semiconductors it is possible to achieve effective flexoelectric coefficients that are hundreds and even thousands of times larger than for insulators2. An important additional aspect of semiconductor flexoelectricity is that it grows with thickness. This means that, unlike insulators, semiconductor flexoelectrics remain as potent at the macroscale as they are at the nanoscale. 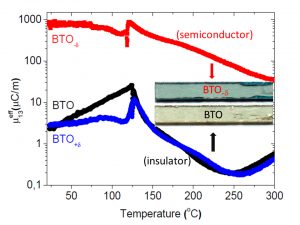 Comparison between the effective flexoelectric coefficient of barium titanate, undoped (insulator) and doped with oxygen vacancies (semiconductor), showing orders-of-magnitude better performance in the latter (from ref. 2).