A “Molecular Selfie” reveals how a chemical bond breaks: Proton is seen escaping the molecule

Imagine what it would be like to watch how the individual atoms of molecules rearrange during a chemical reaction to form a new substance, or to see the compounds of DNA move, rearrange and replicate. The simple idea of watching how molecules break, or transform, during chemical reactions has, until now, been unfathomable since it requires tracking all of the atoms, which constitute a molecule, with sub-atomic spatial and few-femtosecond temporal resolution. Hence, taking such “snapshots” with a combined spatio-temporal resolution to witness a molecular reaction was considered fodder for science fiction.

In their recent study, reported in Science, the team led by ICREA Prof. Dr. Jens Biegert head of the Attoscience and Ultrafast Optics Group at ICFO in collaboration with researchers from the USA, the Netherlands, Denmark and Germany, have reported the first real time and space imaging of molecular bond breakup in acetylene (C2H2) nine femtoseconds (1 femtosecond = 1 millionth of a billionth of a second) after its ionization. The team was able to track the individual atoms of one isolated acetylene molecule with a spatial resolution as small as 0.05 Ångström – less than the width of an individual atom – and with a temporal resolution of 0.6 femtoseconds. What’s more, they were able to trigger the breakup of only one of the bonds of the molecule and see how one proton leaves the molecule.

The team took a single electron, steered it along a specific path with the laser and scattered it off an isolated molecule to record its diffraction pattern. It is mind-boggling to imagine the length and time scales of the experiment. The fantastic cooperation between experimentalists and theorists, atomic physicists and quantum chemists from ICFO, Kansas State University, Max-Planck-Institut für Kernphysik, Physikalisch Technische Bundesanstalt, Center for Free Electron Laser Science/DESY/CUI, Aarhus University, Friedrich-Schiller University Jena, Leiden University, and Universität Kassel made it possible to achieve such feat. 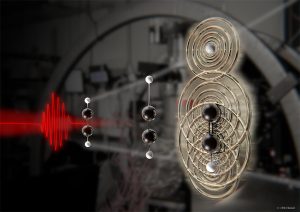 In the laser-induced electron diffraction (LIED) scheme, an intense laser kicks off an ionization reaction that strips off an electron and causes a hydrogen ion (white ball) to dissociate from parent molecule. After 9 fs, the laser drives the ionized electron back to scatter off of the dissociating molecule. The electron-scattering data are used to create snapshot of the molecule in the act of breaking up. [Image: ICFO–The Institute of Photonic Sciences and Scixel]