Siglec-1 is a protein that plays a key role in HIV spread in the body that our group identified four years ago, in an article published in PLoS Biology. This protein is the receptor responsible for trans-infection of HIV (the AIDS virus) to CD4 T lymphocytes. Trans-infection occurs when the virus penetrates into a family of immune cells, called myeloid cells, which are supposed to activate the immune response. HIV uses Siglec-1 to penetrate these cells and turn them into “Trojan horses”, as the virus prevents them to initiate an adequate immune response and uses them to reach its main target, the CD4 T lymphocytes.

We have described now in Nature Communications the existence of a genetic variant that prevents the production of Siglec-1. This is a very rare mutation: it is estimated that only 1.3% of the European population has it in at least one allele, and approx 0.05% has it in the two alleles. Despite this low frequency, and after a screening of more than 4,000 people infected with HIV, our study identified for the first time that there are patients who naturally lack this pathway of viral spread: 97 people in the study had the mutation in one of their two alleles, and two had it in both.

After studying the effect of this alteration in cells taken from patients, we found that the mutation reduces the ability of myeloid cells to capture the virus and transfer it to CD4 T lymphocytes. We observed that Siglec-1 is expressed to a greater extent in people who do not have the mutation, to a lesser extent in those who only have one copy with the mutation, and absolutely nothing in those who have it in both copies. Therefore, the absence of the receptor in people who have the mutation in their two gene copies prevents HIV from entering the myeloid cells and infecting the CD4 T lymphocytes.

Since the absence of this protein does not seem to have any other effect in people affected by the mutation, these results suggest that it would be feasible to develop drugs, complementary to the current ones, intended to block the function of Siglec-1. 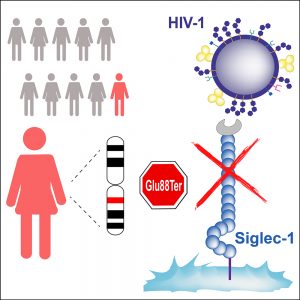 Identification of a genetic variant that prevents the entry of HIV (the AIDS virus) into cells of the immune system called myeloid cells. This mutation prevents the production of the protein Siglec-1, which allows the virus to penetrate these cells.