Genetic mutations are changes in the DNA sequence that can cause errors in cell function, and in the worst case, their accumulation leads to serious diseases such as cancer. To avoid this, cells have mechanisms that are continuously detecting and repairing these changes, but which sometimes fail, resulting in the accumulation of mutations and the emergence of tumours.

The team of López-Bigas has shown that mutations accumulate at higher rate in regions of the DNA to which the socalled transcription factors, proteins that regulate the activity of different genes, are bound. The results of the study indicate that the binding of these proteins to the DNA hinders access to the DNA’s repair machinery, which ultimately causes the accumulation of genetic mutations in these areas. Specifically, the analysis of the genomes of 38 melanomas sequenced by The Cancer Genome Atlas Consortium shows that the mutation rate in these regions is approximately five times higher than in neighboring regions of the genome.

Melanoma, one of the most aggressive types of skin cancer, has its origin on many occasions in DNA damage that ultraviolet (UV) rays cause in skin cells. This damage is repaired by a specific cellular mechanism called Nucleotide Excision Repair. The same mechanism is responsible for the repair of the damage caused by tobacco smoke and that lead to some types of lung cancer. For this reason, the researchers decided to test whether this phenomenon could also be observed in these other types of tumours. The results were reproduced, observing that the areas where transcription factors were bound in lung cells also had a much higher mutation rate than their neighboring regions of the genome.

The researchers also observed the mutation rate in melanomas show a periodicity, with higher mutation rate corresponding to nucleosome embeded DNA and lower in linker regions between nucleosomes. 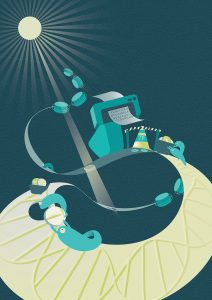 In the DNA regions bound by proteins, such as Transcription Factors (TF), the activity of repair machinery is strongly reduced leading to an increased mutation rate in those sites. Image by Iris Joval. 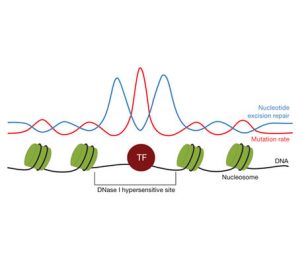