The genetic information of cells is encoded in the DNA, which is read by the cellular machinery to generate RNA molecules. Sometimes, the same gene can give rise to different RNA molecules through the process of alternative splicing, which may produce proteins with potentially very different functions. To date, it is not known how much of this variation is relevant for normal function or may play a role in disease, like cancer. Although cancer originates from mutations in DNA, these have an impact on the RNA molecules of the cell, known as the transcriptome, which can induce and maintain mechanisms linked to the development of cancer.

To better understand the impact of alternative splicing in cancer, we performed an in-depth study of the transcriptomes in over 4,000 tumour samples from eleven different types of cancer from The Cancer Genome Atlas (TCGA) project. We also studied the alterations of regulators of splicing in these tumors. These analyses revealed new alternative splicing alterations linked to cancer. Additionally, we showed that inducing the identified alterations in non-tumour cells, they acquired tumorigenic properties. Until now these alterations had remained invisible to the analysis methods used in major cancer genome analysis projects. These results highlight the importance of alternative splicing in the development of cancer, becoming a new factor to be taken into account in the study of this disease. This research also opens up new ways of understanding the biology of cancer and searching for new therapeutic strategies. 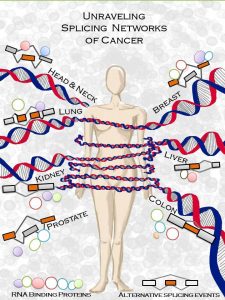 Allegorical representation of the variability of the tumor transcriptomes through changes in alternative splicing in difference cancer types. Illustration by Babita Singh.