To cluster or not to cluster … how to prevent autoimmunity

Natural Killer-T (iNKT) cells are a subset of cells of the immune system. These cells have the ability to become activated during a variety of immune responses, from infections to cancer and autoimmunity. They become activated when their T cellreceptor binds to a specific molecule, called CD1d, expressed on antigen presenting cells. When lipids from micro-organisms or pathogens (called exogenous) are loaded to CD1d and presented to iNKT cells, these cells become activated and trigger the destruction of the invader. However, iNKT cells can also become activated when CD1d is loaded with endogenous lipids. This process is known as autoreactivity. How iNKT cell autoreactivity is fine-tuned to prevent autoimmunity remains enigmatic.

Together with Prof. E. Cerundolo at the WIMM (University of Oxford, UK), we discovered that the spatial organization of CD1d plays a crucial role on the activation of iNKT cells. Using a combination of super-resolution imaging and single molecule approaches, we noticed that CD1d molecules organize in little nanoclusters on the membrane of antigen presenting cells. The extent of clustering is in turn controlled by the actin cytoskeleton, which forms barriers immediately underneath the cell membrane. CD1d molecules loaded with exogenous lipids feel these barriers and remain confined in small regions, limiting the sizes of the nanoclusters. However, in the case of an immune response towards the invader, the actin cytoskeleton re-arranges, opening up these barriers and allowing CD1d molecules to come together so that nanoclusters grow larger. Larger clusters of CD1d promote strong iNKT activation, while small nanoclusters keep iNKT cells in low activating conditions to prevent an autoimmune response.

Our study underscores the importance of emerging concepts, such as protein nanoclustering, in deepening our understanding of how cells of the immune system can fine-tune, at the molecular level, the outcome of an immune reaction. This type of studies are important for the future optimization of immune-based therapeutic strategies in fighting autoimmune diseases and towards cancer immunotherapy. 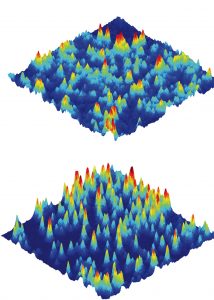 Super-resolution images of CD1d nanoclusters before (upper) and after (below) inflammatory stimulation.