Polymers for organic solar cells: The stiffer, the better

The abundance of energy from the sun makes photovoltaics a serious alternative for generation of an important portion of the worldwide consumption needs. In particular, after about fifteen years of continued research, organic photovoltaic (OPV) materials have enabled the fabrication of solar cells with efficiencies exceeding 10%, which can be scalable through mass production from solution (Fig. 1), allowing low-cost, large-area deposition even on flexible substrates. The peculiarities of charge transport in the organic materials, though, imposes a serious limitation on the thickness of the active layer, being typically restricted to a few hundred nanometers (1 nm= 1/1.000.000.000 m). Hence, the ability to absorb sunlight, determined by the absorption coefficient of the active material, plays a crucial role in the efficiency of the organic solar cell.

Our main contribution is to unravel the key factors which determine the light-harvesting efficiency of an organic material by comparing the performance of over 40 conjugated polymers currently used in OPV devices. By investigating the conformation of the polymeric chains, particularly their backbone structure, we find that the strength of light absorption (given in terms of the extinction coefficient shown in Fig. 2) can be explained by the so-called persistence length of the polymer. The idea of persistence length is sketched in Fig. 2 and is tightly related to the degree of “stiffness” of the backbone structure. The longer the persistence length, i.e. the stretched is the backbone of the polimeric chains, the larger the dipole moment associated with the optical transition involved in the absorption of light. The improvement in light harvesting translates directly into an enhanced efficiency of the solar cell. Exploiting this aspect could open the way to significant improvement in device performance through judicious design of the polymer structure. 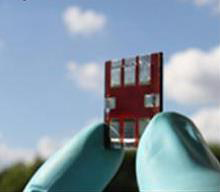